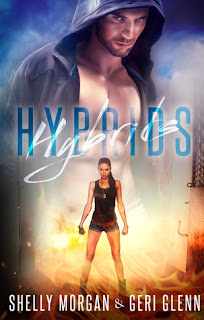 Their mother was the Angel of Protection. Their father was a soldier of the Underground. No one ever thought a demon could love an angel, but when their parents met, it was love at first sight. They fought their attraction until it was too much to take. When God, and the Devil himself, found out about the pregnancy, they fled to protect themselves and their unborn child. But when the pain of labor was over, instead of one baby, there were two; hybrid twins.

Cyrus and Joey are fraternal twins and the product of this forbidden love between ultimate good, and ultimate evil. When their parents are slain immediately following their birth, the twins are given refuge inside of a convent by a kind, but no-nonsense, priest with a penchant for slaying demons. The priest trained the twins from a young age to kill off an entire race that they themselves descend from.

Now, nineteen years later, Cy and Joey leave the convent for the first time to investigate a series of rapes and murder happening at a college campus hours from the only place they’ve ever known or called home. Trying to navigate in this new world of school, parties, and the allure of the opposite sex, the twins quickly learn that being human isn’t all it’s cracked up to be. As they struggle with the feelings that come with falling in love, they both fight a battle from deep within. Will their love be enough? Will their own personal vendettas pull them in the wrong direction? But the question that plagues them most – are they good, or evil?

Half Demon/Half Angel WOW...what an intense read...It's too bad their parents were slain after birth...so sad growing up in a convent...not knowing what their futures will hold...had a great adventure with Cyrus & Joey...will definitely be reading more from these Authors in the future...also thanks to the authors for doing what you do for us readers...it is definitely appreciated...