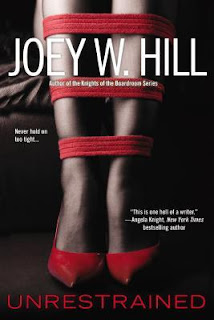 From Joey W. Hill—author of the Knights of the Boardroom series—comes a novel of erotic games and power plays, in which an adventurous woman attempts to break down her own barriers…Athena is an accomplished businesswoman in control of every aspect of her life. But since the death of her husband, she’s had the desire to explore submissive cravings she’s had for some time. Unfortunately, Athena is known as a Mistress, because that’s the role she’s always played.Her type A personality was strong enough to serve her husband as a Domme because that’s what he needed. It’s not until she meets Dale, a retired Navy SEAL, that she attempts to discover what her own submissive desires are. But letting go of her control is not so easy.Fortunately, Dale is an accomplished Master who can help Athena live out her fantasies. And as she slowly surrenders to his touch, both of them will learn more about the nature of love between Dominant and submissive, and how it defies all expectations.

Thank you so much Joey what a wonderful book i had a blast with my adventure with Athena & Dale can't wait to read more of your books! Keep up with the awesome books! All the best for 2015!

Would love to hear from all authors that do give me a chance for my reviews and also from my twitter author friends as well! So come on don't be shy!!!!
Posted by Unknown at 7:24 AM 19 comments: